The entire divorce process is undoubtedly an emotional, overwhelming, stressful, and life-changing process. When you decide to end a relationship, whether it’s been one year of marriage or 30, if you have children or not, to say that the decision is difficult is an understatement. When you need to divide assets, savings, and belongings, there will of course be disagreements and varying opinions. When there are children involved, however, the process instantly becomes even more challenging and complicated.

When there are children involved, the divorce process goes from deciding what to do with the house to who the children will live with and how to keep their lives as consistent and unchanged as possible. The details of child custody can be decided by the parents and children alone, but there are often extenuating circumstances that make coming to an agreement nearly impossible. When an agreement cannot be arranged, the issue of child custody relies on the assistance of a family lawyer or a mediator. If an agreement still cannot be arranged, the court may need to intervene, analyze the specifics of the case, and make a decision based on various factors. 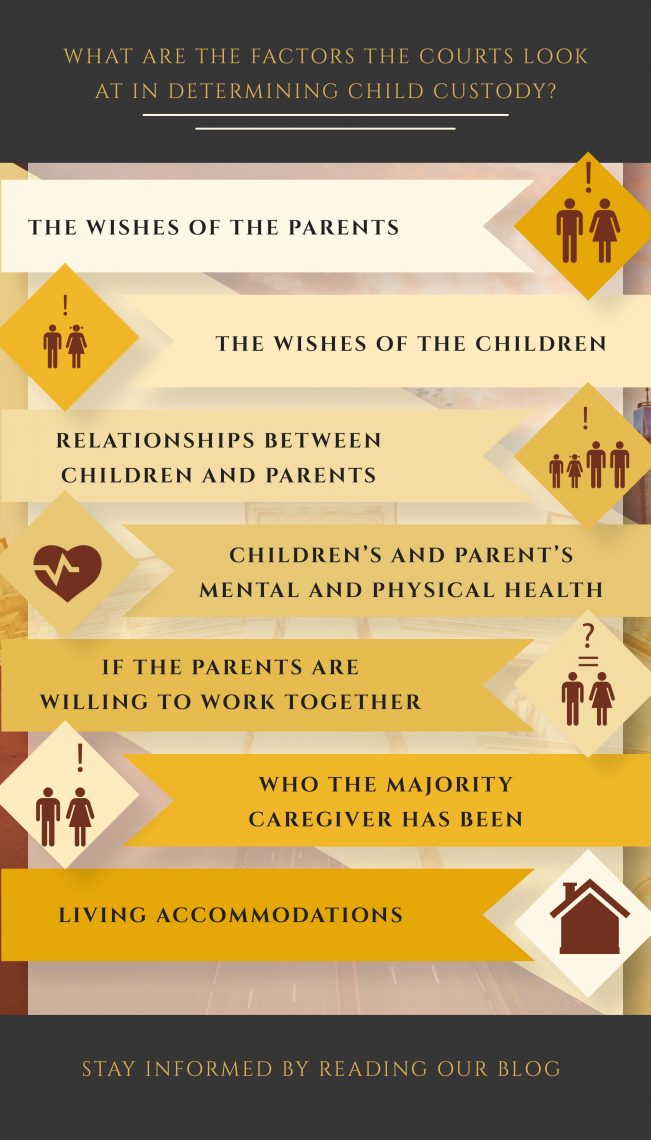 The Wishes of the Parents

At the very least, the court will listen to and take into consideration what each parent wants. However, if the court does need to be involved, it often means that the parents want the same thing — typically, full custody — or that they can’t come to an agreement on how to split time and resources. The wishes of the parents is a factor that plays a part, but there are many other elements to the decision.

The Wishes of the Children

What the children want can play a significant role in the outcome, but it can depend on their age and who was the primary caregiver during the marriage. A child who is younger may still be asked their opinion on who they want to live with or spend the most time with, but because they may not fully understand the gravity of the situation, the court may make a decision contrary to what opinion they gave. The wishes of a child who is older may hold more weight with the court as they have a better grasp of the situation and what will be best for them.

Relationships Between Children and Parents

The quality of relationship that the children have with each parent and the amount of time the children currently spend with each parent will also play a significant role in a child custody decision. If one parent has been absent for a large part of the child’s life and does not have a strong bond with the child, there’s a greater chance that that parent will be granted visitation rather than custody. To determine the relationship between each party, the court will often appoint a social worker or other professional to visit the family and make a recommendation to the court on what will be best for the children.

The health of each parent could include things like physical disabilities or mental conditions, such as depression or anxiety. The physical and mental health of each parent, even though it doesn’t always mean that the parent’s ability to care for the child is hindered, does need to be considered if the health of the parents will have an impact on the best interests of the children. A physical or mental disability or illness won’t disqualify a parent from getting custody, however, both short and long-term health issues can play a part in the decision. The judge will consider a combination of factors, such as parenting skills and the relationship the children have with each parent.

If the Parents Are Willing to Work Together

If one parent is unwilling to work with the other on scheduling, which may affect the amount of time that parent can spend with the children, the court will take that into consideration. Overall, the court wants to know that the best interests of the children are being served. If one parent will make it harder for the other to see and have a relationship with the other parent, that can play a significant role in the decision of child custody.

Who the Majority Caregiver Has Been

When one parent is providing a majority of the care, or in general, parenting, the court may take that into consideration. Deciding who the majority caregiver has been will include looking at things like who makes breakfast for the children, who takes them to school in the morning, and who spends the most time with them at night. It doesn’t necessarily include who provides the most financial support, as financial considerations are often a part of deciding child support.

If the parents are separated and living in different homes, the court will look at each living arrangement. Is there enough room for the children and their belongings? Are each of the homes in a safe neighborhood? Are they clean and taken care of? How close are the homes to other family, friends, schools, and other locations where the child has developed a routine? Again, the court is looking at which parent will be able to provide the children with the greatest level of consistency in regards to their previous living arrangements and way of life.

While there are several factors that the court considers when determining child custody and the specifics of the arrangement, it generally comes down to which parent is able to provide a consistent and high-quality life for the children. Deciding child custody can be a battle, but it’s important for the parents to realize that both parties have the right to visit and have a relationship with their children. Throughout the process, there may be several people involved who will present their findings to the court, so as hard as it may be, it’s always best to try to keep a level head and to work with the court to ensure that the children are indeed getting what is best for them.

Even though the decision of child custody often lies in the hands of the court, it’s essential that you have an experienced and knowledgeable family lawyer on your side who is fully capable of representing you and your rights. Going through this process is very hard, but when you have a divorce attorney on your side that you trust and who knows how much you care for and love your children, it makes the process easier to manage.

The family lawyers at The Law Office of Diron Rutty are passionate about representing clients to the best of their abilities, whether it’s offering legal help for a divorce, alimony, or deciding child support. If you’re going through a divorce and are unable to come to an agreement on child custody, our team of attorneys are here for you. Located in the Bronx, we provide service to all of New York City and Poughkeepsie. Don’t go through this process alone, contact a family lawyer today who will guide you through each step of the process. Schedule a consultation with us today.