The term “sanctuary cities” has been plastered all over the news cycle for this past week. The term is being thrown around a lot, oftentimes without much clarification as to its exact meaning. Considering the significance of what’s been happening at the border, it is important to get clear on what, exactly, sanctuary cities are and why they’ve been in the news so much. The Law Offices of Diron Rutty has the answers to your questions regarding immigration and immigration law. 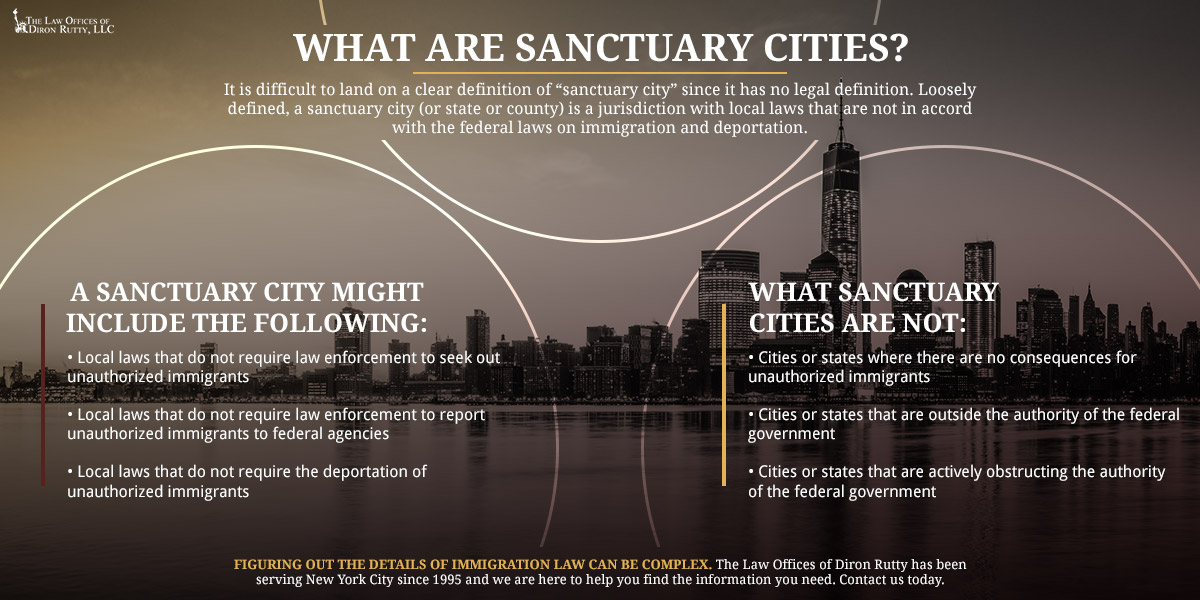 Sanctuary Cities: What Are They?

As a term, “sanctuary cities” can be difficult to pin down — not only because people use it in differing ways, but also because it is not a technical legal or governmental term. There is no official legal definition of what counts as a sanctuary city. In the broadest sense, people often use the phrases “sanctuary cities,” “sanctuary counties,” and “sanctuary states” to refer to jurisdictions within the United States that do not adhere to the federal approach to immigration law. In short, these areas do not cooperate with the federal government’s endeavors to deport unauthorized immigrants.

The difficulty with this colloquial definition of sanctuary cities is that it remains ambiguous. It raises difficult questions as to the role of the federal versus state governments. If immigration is largely a federal issue, for instance, it isn’t clear as to what extent local law enforcement is supposed to play a role in enforcing immigration law in the first place. This, then, raises the question as to why certain jurisdictions ought to be considered “sanctuaries” if it wouldn’t be the responsibility of those local governments and local law enforcement agencies to enforce immigration law in the first place.

Sanctuary Cities: What’s the Role of Local and Federal Governments?

In short, we are led to difficulties in deciding to what extent a local government agency is justified in passive non-enforcement of federal laws versus actively disrupting the functioning of federal laws. To the extent that a jurisdiction is simply operating on their own democratically decided policies while also not disrupting the role of the federal government, it isn’t clear how or why these areas act as “sanctuaries” at all. The federal government is still able to enforce their laws as they are in any other state-run area. State agencies, after all, are not obligated to aid in the enforcement of federal laws.

Ultimately, the ambiguity of the term “sanctuary city” is largely a result of unclear standards for the role of state and local governments in enforcing federal law. The difficulty comes in determining the line between non-assistance and active hindrance of federal law.

Sanctuary Cities: Why are They in the News?

These statements have caused quite a stir, as it remains unclear as to the specifics or justification of such a move. Party lines have been split in their defense of a political action on this scale, and the news cycle has been dominated with heated exchanges regarding the legality, logistics, and morality of apprehending unauthorized immigrants and forcing them to reside in a given area within the United States. It also raises questions as to how sanctuary cities would be a reasonable place to enact such a move, as the areas would still be subject to federal law. This, again, gets at the heart of the appropriate role for federal and local governments.

How can the Law Offices of Diron Rutty Help?

At the time of this writing, there has been no major legal or political action to enforce the move of unauthorized immigrants to sanctuary cities. Moving forward, it’s important to be clear on the terms that people are using in debates about immigration and immigration law. Read our blog post for more information on the basic rights for immigrants, or contact the Law Offices of Diron Rutty in the Bronx to speak with an immigration lawyer today.