A green card (or a Permanent Resident Card) allows non-United States citizens to gain permanent residence to the U.S. Many individuals and families want a green card because it allows them to lawfully live and work anywhere in the United States and to qualify for U.S. citizenship after three to five years.

There are many categories of green cards and ways of obtaining each type, which is what we will be covering in today’s post. If you have any questions or would like assistance with obtaining a green card, reach out to our immigration lawyer in the Bronx at the Law Office of Diron Rutty today. 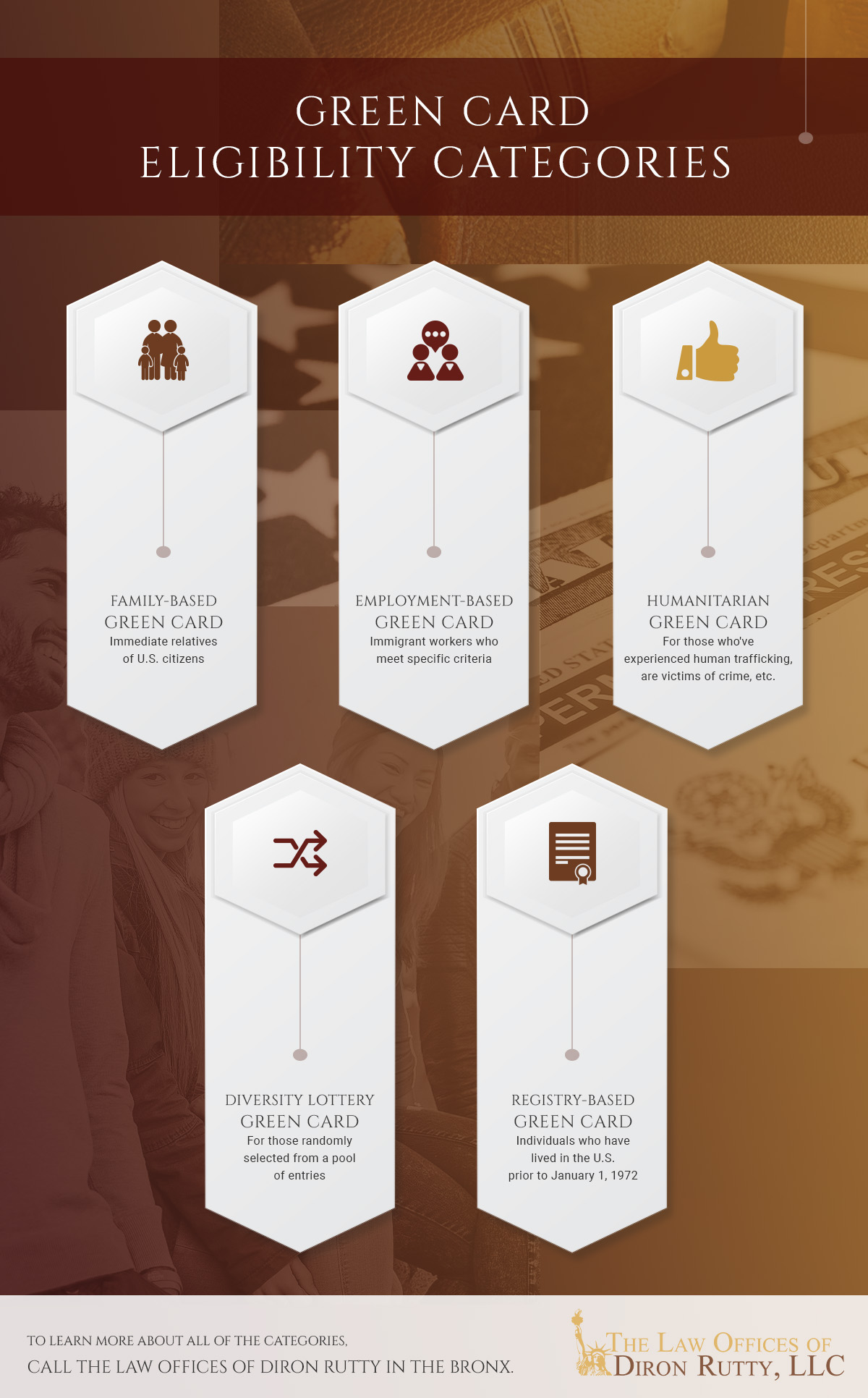 Close relatives of United States citizens, as well as current green card holders, can apply for a family-based green card of their own. Eligible family members include spouses, children, siblings, and parents. Spouses and children of those spouses, adult children, and siblings can also apply.

Widows and widowers who were married to a U.S. citizen at the time of their death can also apply as long as they are able to prove that their marriage was authentic. Extended family members like cousins, aunts and uncles, and grandparents do not qualify for a family-based green card. These individuals may apply for a green card if they, too, have a closer relative who is a U.S. citizen or current green card holder.

If you are wanting to apply for a family-based green card and have questions about how to do so correctly, give our immigration lawyer a call at the Law Office of Diron Rutty.

With an employment-based green card, workers are able to apply for permanent residence in the United States along with their spouses and children (in some cases). There are multiple subcategories of workers that are included, which are:

These workers have positions in the arts, sciences, business, education, and athletics that require your achievements to be recognized in your field through extensive documentation, such as outstanding professors and researchers.

These workers require at least a master’s degree, a bachelor’s degree with at least five years of relevant experience, positions in the sciences, arts, business, education, and athletics with exceptional ability, or positions of national interest.

Physicians (EB-2 with a special waiver)

These workers are physicians who agree to work full-time in underserved areas for a specific period of time and meet other eligibility requirements.

These are media professionals, religious workers, Afghanistan and Iraq nationals who have served the U.S. government under certain capacities, and certain other employees, retirees, and their families.

These are non-U.S. nationals who have invested (or are investing) at least $1,000,000 (or $500,000 in a high-unemployment or rural area) in a new United States business that will create full-time positions for at least 10 workers.

This type of green card is for those who have experienced fear or persecution in their own country due to their race, religion, nationality, political views, or membership in a particular social group. This also applies to human trafficking victims, crime victims, and abuse victims that will allow them to seek relief and protection.

NOTE: If you (or someone you know) are experiencing domestic abuse, contact the National Domestic Violence Hotline right away.

Under the Diversity Visa Lottery Program, the United States government randomly selects up to 50,000 people from a pool of entries it receives each year from six geographic regions including Africa and Asia. This lottery is only for people from countries that have had little immigration to the U.S. in the past.

The U.S. government issues many other types of green cards, including green cards for “special immigrants,” Cuban citizens, and American Indians born in Canada. You can view a list of these other green card categories and their eligibility requirements on the USCIS website.

If you have any further questions about each category or would like assistance with applying for a green card, be sure to contact our immigration lawyer at the Law Offices of Diron Rutty in the Bronx today. We look forward to working with you and assisting you throughout the green card application process.