In an ideal situation, parents who are going through a divorce will be able to come to an agreement on child custody on their own. They will decide when the child will spend their time at each parent’s home, how much time, and who will be responsible for various things, such as school meetings, who is picking them up or dropping them off, and more. There are some cases, however, when the parents are unable to come to an agreement that is suitable for each party. One parent may want full custody, both parents may not be able to agree on the timing and duration of visitation, or there may be larger issues such as when parents live in separate states.

In these circumstances, the couple can work with their family lawyer, or they may need to go through family mediation where a third party will help both parents make compromises and come to a mutual agreement. When an arrangement cannot be made even with mediation, the court may intervene and will possibly interview each party, or will have a social worker interview everyone involved, including the child. The court will consider various factors, including the wants and needs of the child.

When deciding the details of child custody, the court will take all of the information they’ve gathered and will come to a conclusion they believe is in the best interest of the child. The types of child custody include legal custody, physical custody, sole custody, and joint custody. 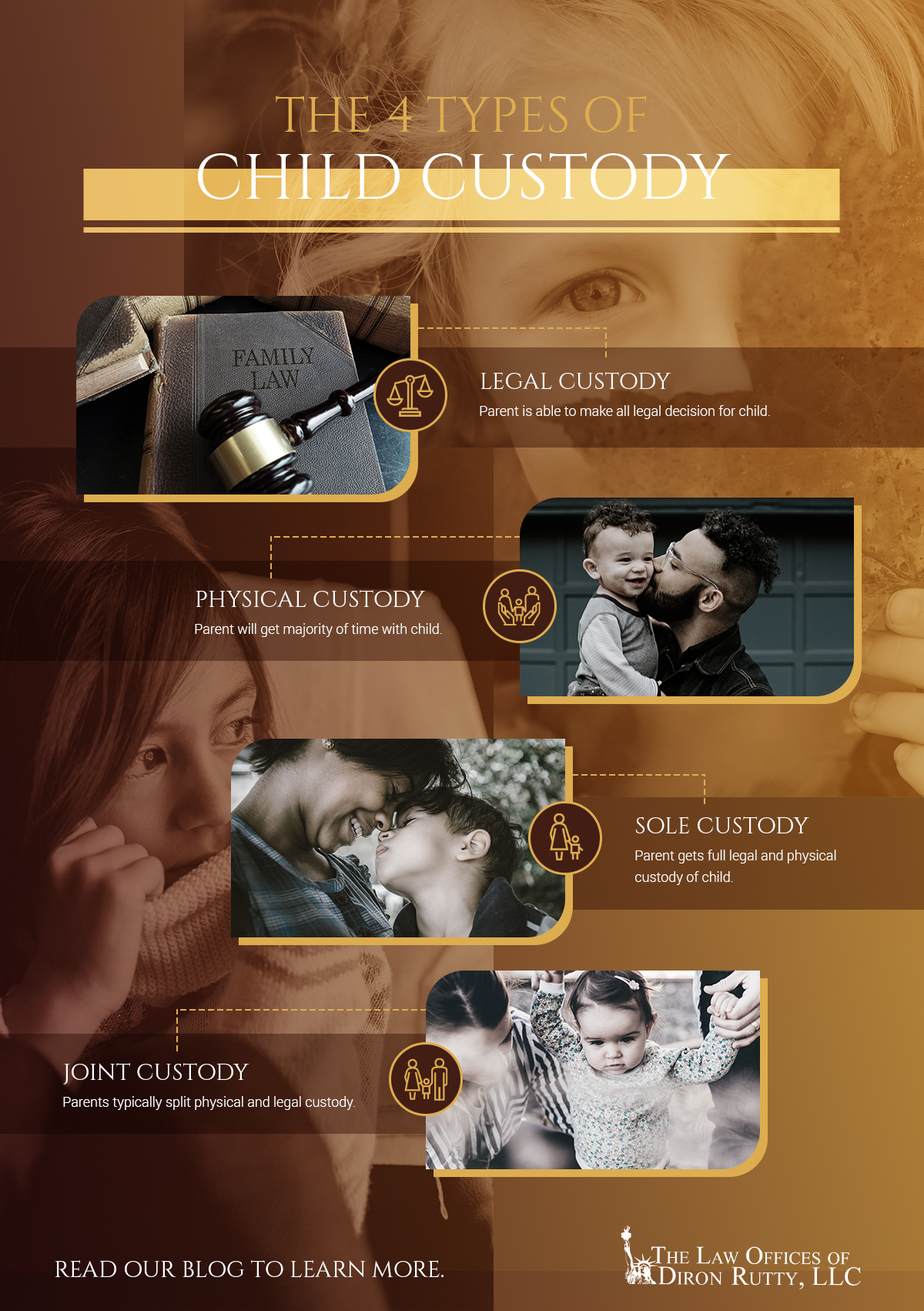 A parent who has legal custody is able to make decisions regarding the child’s education, healthcare, or other concerns without consulting the other parent. Legal custody can be awarded to the parent who the child spends the most time with; however, in many cases, legal custody is given to both parents so that there is an equal responsibility in making important decisions for the child.

The parent who is awarded physical custody is the parent who the child will spend a majority of their time with, while the other parent is given “visitation” rights and is the non-custodial parent. Family law courts often distinguish the time spent with each parent as a percentage — 60 percent of the time with the custodial parent, and 40 percent of the time with the non-custodial parent. Recently, however, courts have seen how important it is that children get equal amounts of time with both parents. When possible, parents will be given joint physical custody, so that the child spends their time 50/50 with each parent.

When sole custody is awarded, one parent will have sole physical custody and/or legal custody. When one parent is deemed unfit by the courts, due to neglect, abuse, or drug or alcohol dependency, the other parent can be awarded both sole physical and legal custody. In these cases, the other parent is often still able to generously visit their child. In many cases, however, even when one parent is awarded sole physical custody, both parents will receive legal custody. This allows both parents the opportunity to be involved in the decision making for their child. Unless there is an obvious reason why a parent should not be awarded at least visitation rights, it may be best to let the courts make the decision and not fight for sole custody. This will ensure that there is as little animosity between you and your ex as possible. If you have questions about the details of custody, speak with your family lawyer.

When joint custody is awarded, it typically means that both parents have both physical and legal custody of the child. In these cases, a schedule will need to be arranged regarding when the child spends their time with each parent. Popular schedules involve alternating weeks or months, but can also involve alternating six-month periods, years, or splitting weekends and holidays with one parent and weekdays with the other. In some cases, an option that is becoming more popular, the child will remain in a single home and the parents will actually move in and out. When a schedule cannot be agreed upon, the court will determine a schedule and both parents will need to comply with the arrangement.

Of all the possible situations, joint custody is often the most beneficial for the child, giving them an opportunity to spend time equally with both parents. Each case is unique, though, and the court will look at all of the factors involved in the case before making a decision.

Child custody, who is awarded what, and the details of the schedule can be confusing and complicated, not to mention overwhelming and emotional. When you’re going through a divorce and the decision of child custody needs to be determined, it is essential that you work with a family lawyer who has your best interest at heart, and the interests of your child. When there are so many factors for the courts to consider, having a reliable attorney, one who knows you and your situation, will ensure that your interests are represented as well.

The Law Office of Diron Rutty has been representing the residents of the Bronx, New York City, and Poughkeepsie since 1995. We have a thorough understanding of the court system, the child custody process, and what factors a judge will weigh the most in determining child custody. We will work tirelessly to ensure that you and your child get what is best. Whatever the specifics of your case are, we will be there from start to finish providing sound legal advice and guidance. Schedule a consultation with us today.